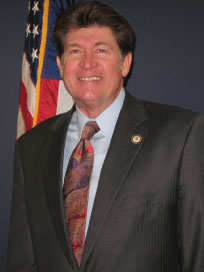 Richard Moore was sworn in as TVA's first Presidentially appointed Inspector General on May 9, 2003.

From 1985 until his confirmation as Inspector General, Mr. Moore served as Assistant United States Attorney for the Southern District of Alabama. During that time, he prosecuted criminal cases involving white collar crimes, official corruption, and general federal crimes. He also served as Coordinator of the Anti-Terrorism Task Force in the Southern District, as Senior Litigation Counsel, and as Chief of the Criminal Division in the U.S. Attorney's Office. From 1997 to 1998, Mr. Moore was an Atlantic Fellow in Public Policy at Oxford University, Oxford, England, where he conducted an independent study on the prosecution of complex international fraud cases. Prior to serving with the U.S. Attorney's office, he was in private practice in Mobile, Alabama, and Cleveland, Ohio.

Mr. Moore served as Chairman of the Investigations Committee of the Council of Inspectors General on Integrity and Efficiency (CIGIE) from May 2009 to April 2011.

MESSAGE FROM THE INSPECTOR GENERAL

I am pleased to present our report for the period October 1, 2016, to March 31, 2017. As mentioned in the previous semiannual report to Congress, the role of the Office of the Inspector General (OIG) in identifying potential risks to Tennessee Valley Authority's (TVA) ability to achieve its mission of providing reliable power at affordable rates, environmental stewardship, and economic development to the Tennessee Valley is imperative to the agency's success.

In this semiannual period, our audit, evaluation, and investigative activities identified approximately $40.7 million in funds TVA could put to better use, questioned costs, recoveries and savings, and other monetary loss as well as opportunities for TVA to improve its programs and operations. Some of the highlights include:

On a personal note, I want to thank Ben Wagner for his many contributions to the TVA OIG. Ben retired May 12, 2017, after a distinguished career in TVA of more than 38 years. About 31 years ago, Ben joined the TVA OIG as it was being formed and played an instrumental role in building our organization. His leadership and contributions shaped the OIG and made us and TVA better. We thank you, Ben, for your exceptional service.

The role we play in identifying risks so that TVA Board members and executive management can mitigate those risks is a responsibility our office takes seriously.

We intend - through our audits, evaluations, and investigations - to continue providing TVA with a perspective that allows it to leverage lessons learned to better serve the 9 million people of the Tennessee Valley.

If you see something that doesn't look right, say something. By doing so, you help the OIG stop fraud, waste, and abuse in its tracks! Anonymous & Confidential. The EMPOWERLINE® is a safe outlet for reporting and is available 24/7.